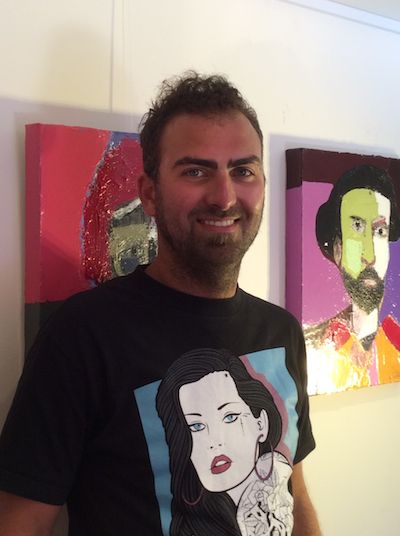 Jerome SAAM is a self-taught artist born In Lorraine, France in 1981. During his childhood he had a passion for drawing and years later, after studying in the administration field, started his passion for painting around the age of 19. He kept memories of parties, catching the moment and drawing sketches inspired by The Luxembourg nightlife. His first painting and diverse arts were about concerts, meetings, locations where he travelled in Europe and in particular Spain, England, Norway, Italy, Finland, Portugal…In 2001, while he was settled in Brigton, UK, he met various artists who is sharing his passion with. A vocation was definitely born !
In July 2006, while he was painting on a weekly basis, he met Victor Hash, in an art gallery located in the Grund, picturesque area in Luxembourg. This meeting made him take another turn in his painting career because of all advises and experience shared with the artist on that day. Between 2010 and 2014, Jerome Saam, participated in severals exhibitions in Lorraine, first in group exhibitions in Audun le Tiche and Villerupt (during the famous Italian film festival), France, also in Thil, Talange, Hagondange, Audun le Roman. In 2010, he is joining 'La croisee des Arts d'Acquitaine", an Art convention based in Acquitaine, France, which will lead him to start doing several exhibitions in Biarritz, Ondres, Urugne, Saint-Paul-Lès-Dax, & Peyrehorade. In 2011, he made an appearance at an exhibition wearing a Star Wars mask which caught everyone's attention and won the originality price for his painting on that day. The same year he had exhibition with another artist called Nicolas Venzi, in Esch/Alzette, Luxembourg and received positive reviews. In 2012, he was asked to be part of an Art exhibition in Metz, France called "Parcours d'Artistes" to show his work. in 2013, he started to have exhibitions at Gallery Bo, in Skagen au Denmark. The same year, he is joining another gallery called Galerie125 in Argancy, in the Moselle region in France. In 2014, after several local and regional exhibition, he was contacted by A GLASS HOUSE in Paris, and got selected to be part of a 4 months exhibition for which the main theme was the glass factory from Saint-Just, one of the last factory in the world to produce handmade glass. Jerome Saam is a versatile artist who can use different techniques such as collage, grease crayon, charcoal, acrylic. Jerome used a lot of different packaging materials since the early stage of his career but nowadays he is using canvas. He is highly inspired by artists such as Victor HASCH, Zumeta, Jean Cocteau, Basquiat, Picasso..