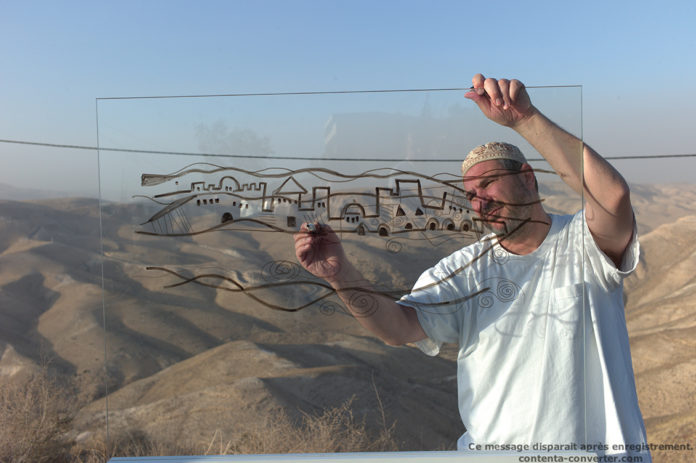 From soft pastels to light, from the poetic to the fantastic, the human to the divine, this is the path taken by Yoël Benharrouche, a renowned artist with a striking career.
Born to deeply religious parents in Beersheva in 1961, he grew up in Aschdod where he was soon to become impassioned by the Scriptures and a familiar face at various study centers. He arrived in nice in 1974 and in 1985 completed his Fine Arts training, studying fundamental Jewish texts and teaching drawing. His firs canvases show great sensitivity, with and underlying taste for the Absolute and a search for new aesthetics which express his mystical conception of Man and the World.
In 1993 he returned to Israel and set up home at the gateway to the desert and, against this grand background steeped in history and spirituality, gave free reign to his inspiration. Alongside his wife and five children he sculpts and paints a world where the material becomes spiritual, and the lyricism of colours and the delicacy of forms are a celebration of the Creator and his Creation.
Today, Benharrouche exhibits his works throughout the world. His words form part of many private collections and critics hail him as a confirmed and talented artist.

I have told about shadow and light, I have told about water and fire I gave my strongest thrust in a surge of energy I expanded the universe of dream To all those who revealed and loved you In the heart of Saint Paul de Vence..